What Happens In A Jury Trial 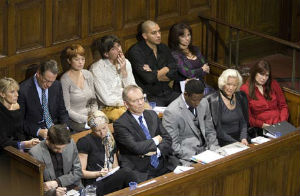 While most criminal cases end in a guilty plea to some or all of the charges,

occasionally the defendant decides that he wants to go to trial. This may be

charge that the District Attorney wants him to plead to. Also, the defendant may

of the crime he is charged. This note will focus on a jury trial although a defendant

of the person charged.

District Attorney picktwelve people to decide the case. A panel of approximately

forty people are called into court. Questions are asked of them by the judge,

District Attorney, and the defense counsel. This is called “voir dire”. It is meant

case. Once this occurs the attorneys can then strike out up to eight other people

each for whatever reason they want (as long as it is not for racial reasons). Once

the rest of the people are sent home.

After the jury is selected the District Attorney makes

show that the defendant is guilty. The opening statement is not evidence but is

a guide for the jury as to how the case will go forth. The defense attorney may

then, if she wants, also make an opening statement letting the jury know how

the defendant intends to show that the District Attorney is wrong. The defense

to counter what the District Attorney has just said.

Case For The State:

The Commonwealth then begins the process of proving

its case (proving it beyond a reasonable doubt). This is done by calling witnesses.

Usually at least one of the witnesses is a police officer involved in the case. After

in order to weaken the testimony or bring out other facts favorable to the defense.

case. Once the District Attorney is done he rests his case. The judge will then

Under the Constitution the defendant is not obligated to testify

or present any evidence. It is strictly up to the defense. If the defendant wishes to

put on a case and/or testify it follows along the same lines as the state’s case. The

District Attorney can cross examine any witness, including the defendant.

guilty of some or all of the charges or why it should acquit the defendant. Defense

and gets to go last. (In some states the state goes first but is allowed to offer a

rebuttal argument after the defense counsel has spoken.) Closing arguments are

not evidence. While facts will be argued by each side it is the memory of the jury

that counts in the end.

The last thing to occur is the instructions. The judge tells

the jury what the law is that pertains to the case. For instance, in a DUI case the

defendant operated a car, did so on a public highway, and was under the influence

limit. The jury then decides if the evidence proves that the defendant did what the

After the instructions the jury goes into a room to deliberate. It

to the courtroom to listen to certain testimony again. The jury is also permitted to

ask written questions to be answered by the judge. The jury’s decision must be

unanimous either as to guilt or innocence. If not the judge will declare a mistrial

and, if the District Attorney so chooses, another trial is held. If the jury finds the

defendant may be tried on those charges not decided. If the defendant is acquitted

of all charges he is free to go home. If convicted of some or all of the charges he

may be released on bail or put in jail pending sentencing.

The information presented is not legal advice, and your use of it does not create an attorney-
client relationship. No recipient should act on the basis of any content included in the site

disclaims all liability in respect to actions taken based on any content of this site. Because every

case is different, any prior results described on this web site do not guarantee or suggest a similar